“ALRP is incredibly grateful for Bernardo’s generous service to our clients and our organization.” 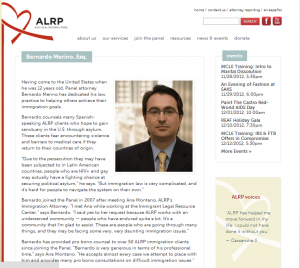 Having come to the United States when he was 12 years old, Panel attorney Bernardo Merino has dedicated his law practice to helping others achieve their immigration goals.

Bernardo counsels many Spanish-speaking ALRP clients who hope to gain sanctuary in the U.S. through asylum. These clients fear encountering violence and barriers to medical care if they return to their countries of origin.

“Due to the persecution they may have been subjected to in Latin American countries, people who are HIV+ and gay may actually have a fighting chance at securing political asylum,” he says. “But immigration law is very complicated, and it’s hard for people to navigate the system on their own.”

Bernardo joined the Panel in 2007 after meeting Ana Montano, ALRP’s Immigration Attorney. “I met Ana while working at the Immigrant Legal Resource Center,” says Bernardo. “I said yes to her request because ALRP works with an underserved community — people who have endured quite a bit. It’s a community that I’m glad to assist. These are people who are going through many things, and they may be facing some very, very daunting immigration issues.”