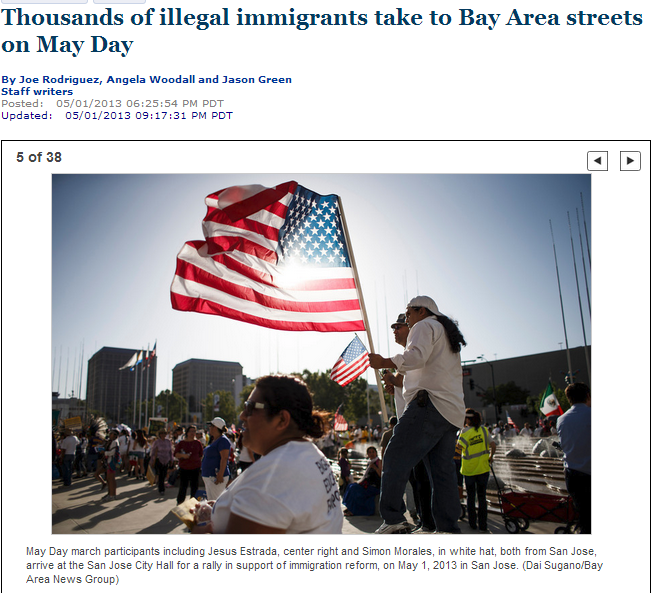 “I feel like I’m on a bus with 11 million other people,” said Yoli Mesa, 43, of San Jose, an illegal Mexican immigrant. “The fear we had in past years is behind us. What’s in front of us is the dream we’ve always had of living here.”

From coast to coast, demonstrators rallied or marched with a sense of urgency as the U.S. Senate debates a sweeping bill that would legalize most of the estimated 11 million illegal immigrants. But the proposed legislation also stands to disqualify more of them than a general amnesty granted in 1986, the last time Congress tried to solve the vexing problem with a single bill.

The immigrant-rights movement has embraced May Day since 2006, when hundreds of thousands of people turned out nationwide for angry protests against the immigration policies of a Republican-controlled Congress. The size of Wednesday’s marches paled in comparison, but the political landscape and the strategies and mood of the movement have also changed profoundly, becoming more optimistic and politically engaged.

The San Jose event began with a legal clinic at Our Lady of Guadalupe Church on the city’s East Side, where a few dozen immigrants peppered immigration attorney Bernardo Merino with detailed questions about their chances of gaining a green card or citizenship.

“How many of you have your heads spinning from what I’m saying?” Merino asked in Spanish. “You have to keep in mind that this proposed law isn’t final. It’s a proposal right now, but it’s very complicated, and every case has its particulars.”

As she headed for her spot in line for the march from the east San Jose to City Hall, Mesa said the legal clinic put her at ease.

“I feel more confident with the lawyer here,” she said. “It helps us feel like we’re not alone.”

In Oakland, a spirited rally at the Fruitvale BART station plaza had a distinctly Latino flavor, but there also were people whose roots stretched to Germany, India, Africa and Asia. A group of Muslim women, dressed head-to-toe in black chadors, marched with a banner reading “No Fronteras (No Borders).”

The marchers walked along International Boulevard to Mi Pueblo supermarket, where management has conducted background checks for immigration status as workers have tried to organize a union.

“We need the reform,” said Rosa Rojas, one of the Mi Pueblo workers who quit because of the background checks.

She hopes to see the process for gaining citizenship — which could last 13 years under the current proposal — shortened.

Jose Rivera, an Oakland machinist whose family moved from Mexico to Los Angeles when he was 12, said he marched to “let people know we’re here. … I want my sons to have it better.”

At an afternoon rally and march in Mountain View, a Peninsula city with its own tradition of immigrant activism, 50-year-old Roberto Munoz said he is tired of seeing families torn apart by deportation. He wants to see his fellow immigrants get the same sort of amnesty he got in 1986, when President Ronald Reagan signed a bill that made family reunification easier than the current proposal would.

Jorge De La Concha, 24, was hoarse from shouting motivational chants through a bullhorn at the Mountain View march.

“As of right now, if I graduate college, I’m not going to have a job,” he said. “Why? Because even though I’m getting an education, I don’t have a Social Security number. … If immigration reform happens to pass, it would open millions of opportunities.”

Also at the Mountain View march was Elizabeth Jaime, 31, who arrived in the U.S. as a child. She is too old now to apply for the protection from deportation for young illegal immigrants put in place last year by President Barack Obama. She said she fears being “left behind” under the Senate bill.

Just before the San Jose march started, Maria Villalobos stuck a tiny U.S. flag onto the bun of her rolled up hair. She had brought her three American-born children, one a 3-year-old in a stroller.

“I don’t think I have any Mexican flags at home,” Villalobos said. “I live here now.”